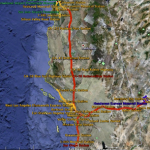 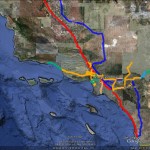 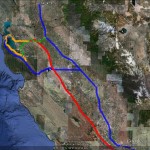 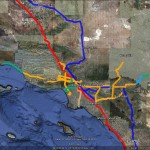 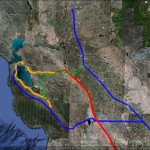 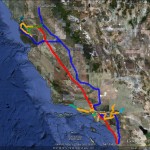 The elegance and efficiency of the proposed 800-mile monorail system alternative to the high-speed rail project are exemplified by the juxtaposed route maps of the two systems; which delineate a relatively straight and direct 500-mile high-speed monorail system route between the San Francisco Bay Area and San Diego, and built completely within the center median of California’s Interstate 5 Freeway, compared with the far flung and erratic 800-mile route of the proposed California High-Speed Rail System. This comparison of routes and rights of way is just the beginning of the dramatic contrasts and differences between the steel rail and monorail proposals, which extend to every aspect of the respective plans’ engineering, development processes, rights of way, technology, efficiency, environmental impacts, energy use, economic impacts and domestic content, as well as, the systems’ short- and long-term financial profiles.

American Monorail’s transportation infrastructure and system proposals present California government and industry, as well as communities and their local economies, with opportunities to transform and revive the basic foundations of urban living, economics and public services. By relieving government and taxpayers at all levels of the ever-increasing financial burdens of building, maintaining and funding mass transportation services, American Monorail proposes the comprehensive development of a monorail industry from research, development and manufacturing, to design, construction and operation of the world’s most advanced and efficient mass transportation systems.