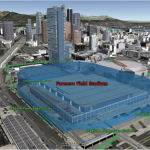 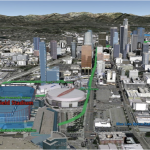 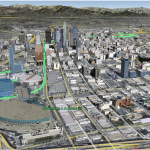 Farmers Field National Football League stadium, to be located in the LA Live-Convention Center area of Downtown Los Angeles, is currently in the processes of design, engineering, environmental review and construction permitting for the development of a $1.5 billion stadium complex and convention center expansion. American Monorail’s proposal to develop a four-mile monorail system connecting the Los Angeles transportation hub at Union Station with eight stations and the NFL stadium offers significant and unique opportunities to reduce traffic congestion, vehicle trips, parking demand, street improvements, traffic control, and a variety of traffic related impacts on the streets surrounding the stadium and convention center, as well as, extended downtown Los Angeles.

With monorail stations located in close proximity to subway stations at Union Station, Hill Street/Civic Mall and 7th & Flower streets, stadium and convention center visitors could easily transfer from city subways and rail transit to a Downtown Los Angeles monorail that would deliver them directly to the stadium’s interior concourse, as well as, three hotels, LA Live, Staples Center, Los Angeles Music Center, Disney Concert Hall, Broad Museum of Art, City Hall and the Los Angeles Civic Mall; above, and completely separated from all forms of traffic, transportation and activities of the city. Space and structures for parking of thousands of cars could be eliminated from all buildings and activity settings directly served by the monorail, and the streets on which the vehicles would necessarily pass in route to and from the venues would be relieved of the congestion they would impose on downtown.

Incorporation of monorail station facilities in the design and functional operation of new construction projects can greatly enhance the efficiency and environmental impacts of urban development, while extended monorail systems and services can significantly reduce the impacts of vehicle traffic on streets and urban settings along their entire routes. Indeed, the proposed four-mile monorail system holds the greatest potential for improvement of downtown traffic conditions and parking of any transportation system or improvement; or all of them combined.