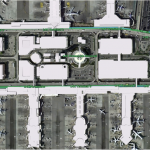 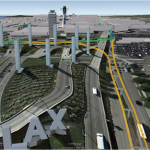 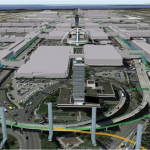 Currently in the midst of an extensive expansion and modernization project, Los Angeles International Airport could further improve the accessibility and efficiency of all major airline terminals by developing an American Monorail-proposed airport monorail system that would encircle the promenade and deliver passengers to and from each terminal on a continuous basis. The station concourse would be built into the front facades of each terminal building.

The monorail guide way would enter the airport after passing through a Century Boulevard station before entering a security monorail station, continuing along the concourse to each airline terminal, then returning to the Century Boulevard duel monorail guide way three miles to a Green Line light rail connector, or enter the northbound 405 Freeway median and the American Monorail-proposed LAX- West Los Angeles- Santa Clarita Commuter Express Monorail to Santa Clarita, 35 miles north of LAX.