You are here: Home » Organizational Forum » Private Business and Industry 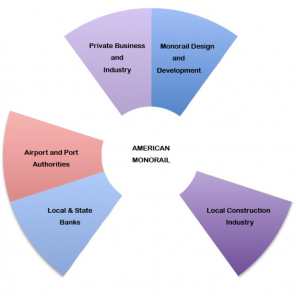 American transportation planning and development have evolved from privately built, owned and operated railroads to an ever-increasing government investment in transportation infrastructure. From the interstate highway system to freeways, streets, bridges and virtually all infrastructure built to convey and serve the millions of privately owned automobiles and trucks traveling on them, government has historically met, and in many ways encouraged and shaped the demands and expectations of the transportation industries of America. Beginning with subways and municipal bus systems, public transportation agencies and authorities have progressively expanded their roles in providing transportation services to the extent that mass transportation development and services have become the nearly exclusive domain of federal and state governments.

Media and promotional campaigns, local chambers of commerce, construction and labor interests, business and industrial associations, trade and convention authorities, schools and public information services can bring organizational support and investment into focus on the distinct and strategic advantages and opportunities presented by monorail development. Public and quasi-public entities including airport and port authorities may leverage their significant financial resources into monorail initiatives such as the American Monorail-proposed Los Angeles International Airport monorail station promenade, serving all terminals in the existing airport, the LAX to Palmdale airport monorail connector, or Long Beach Harbor Cargo Monorail, and may join privately owned airlines, shipping or railroad companies in joint financial ventures to plan and implement monorail systems that serve their mutual interests.

Monorail manufacturers and system developers need to establish a presence in the public information, planning and evaluation processes through which the majority of public transportation systems are designed, funded and implemented. By clearly addressing the full range of transportation-related conditions, problems and limitations faced by local government and transportation authorities, potential solutions presented by monorails, their manufacturers and monorail system developers can promote state of the art, 21st century transportation technology; leading to new joint venture and financial coalitions, while directly engaging constituents and potential riders at a community planning level.

These initiatives could begin to bridge the nearly complete separation between the planners and decision makers who currently determine the location and nature of all transportation development and services, and the local residents, commuters, property owners, communities and representative governments who are the actual customers, constituents and beneficiaries of transportation development and services. Large, diversified corporate entities capable of supporting industrial research and development of advanced transportation systems, along with their construction, installation and financial implementation, may provide all elements and incentives required to bring governmental, community and private sector interests into common agreement on monorail system developments.

In order for monorail financing to be implemented through private sector industry and financial institutions, the primary source of revenue would necessarily be focused on the fare structure with regard to servicing of construction and system development debt, as well as, operational costs. While the fare structures of government/taxpayer-subsidized public transportation systems of all types offer no relevant guidelines or comparisons, recent proposals to permit single occupant vehicles to use two 12-mile segments of Los Angeles high occupancy freeway Diamond Lanes for fees of $1-$1.40 per mile, provide some support for monorail fare pricing between $1 and $2 per mile. Proposed Diamond Lane pricing does not address any of the additional parking or operational costs that premium fee paying drivers incur in commuting and maintaining their personal vehicles; a significant portion of which would be relieved by monorail services, including parking fees, fuel and maintenance expenses, as well as, vehicle depreciation, repair, insurance and registration fees.

Private business, industrial and manufacturing associations and interests are in the most strategic position to initiate and underwrite efforts to build a new US monorail industry. Attracting and directing start-up and venture capital toward a new industrial frontier can capitalize on internationally proven monorail system technology, environmental compatibility, significantly lower development costs and cost-effective operation. This campaign should address the current state of neglect and decay to which most American infrastructure has fallen by presenting a robust new infrastructure model that can be projected into the existing infrastructure systems of the United States. Setting new, 21st century goals and standards for transportation infrastructure and industry, monorail manufacturers and developers can lead the US toward a recommitment to developing and maintaining high quality, modern infrastructure throughout the nation.

A joining of resources committed to development of an NFL stadium, hotels and office towers in a four block area of downtown Los Angeles could provide all the inertia and capital required for owner-developers AEG, Marriott International, Korean Airlines, Hanjin Corporation and Thomas Properties Group to underwrite, design, build, own and operate a complete monorail system connecting the LA Live-NFL stadium-Staples Center-Ritz Carlton–JW Marriott and Wilshire Grand Hotel multi-billion dollar development plans with the Bonaventure Hotel, Los Angeles Music Center, LA Civic Mall and Los Angeles City Hall with subway stations and the LA Union Station rail nexus, in the American Monorail-proposed Downtown Monorail Plan. The approximately $150,000,000, four and one half-mile monorail system could be developed on the strength and financial advantages of reduced development costs through substantial reductions in required parking, traffic control and congestion relief that the massive developments would require under conventional development agreements and permits. The monorail system would extend traffic and parking relief throughout the length of the service, without creating any of the congestion, danger and certain gridlock that the $125,000,000, proposed “Downtown Trolley” would impose on the city’s most congested streets.

Newly formed and existing lending and financial institutions can join monorail manufacturers and local construction industry interests in penciling-out, and articulating the financial parameters and distinct advantages presented by monorail system development to local economies, as well as, communities, cities and their respective governing bodies. Establishment and growth of banks and lending institutions that are based on building and maintaining community and municipal infrastructure can form the most stable financial foundations for a variety of public and private investments that have not been possible under traditional lending, financial and governmental separations of powers and jurisdiction. Following through, and building upon right of way-monorail system joint development agreements between local governments and monorail system builders, permanent financial institutions can be formed to support construction and operation of new monorail systems and services, as well as, provide stable lending opportunities to the broader economic environment of local communities. Local government fiscal managers, pension funds, credit unions, utility companies and other local and community-based financial entities may find safe, secure and profitable investment opportunities in such public or semi-public banking and financial institutions, that may, in turn, form the grass roots and community based foundations of a national monorail industry.