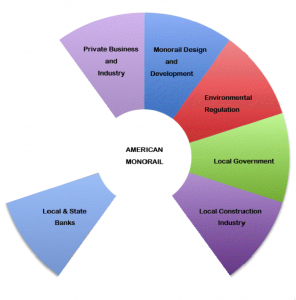 Most historically successful and dynamic American cities and communities, whether large or small, urban, suburban or rural towns, have struck a mutually supportive balance between their respective transportation systems and community development. The vast majority of urban and suburban growth and development that have shaped nearly every city and urban center, as well as, towns and their surroundings, have resulted from development of privately owned land, to a great extent in conjunction with the development of transportation systems serving the local settings, communities and regions of the nation.

The practices of transportation system building, land use planning and economic development have diverged into separate, uncoordinated activities of government and private industry, with governing authorities assuming ever-increasing regulatory and limiting roles, while private sector landowners and developers assume primary responsibility and leadership in financial and design initiatives that determine the character and location of land development that shapes urban growth and cities. These conditions have led to a widening disconnect between transportation planning and urban development.

One of the fastest growing and most dynamic suburban areas of the US is the extensive valley, foothill and mountain expanse of Santa Clarita, Valencia and outlying Tejon Ranch properties extending north from the San Fernando Valley, in the City of Los Angeles. Scene of the majority of LA County’s suburban development over the past two decades, Santa Clarita Valley communities have been consistently ranked among the best, and most attractive in the nation. Primary credit for the high quality of community life and residential opportunities must be extended to the developers who have planned and built the communities of the Santa Clarita Valley to exemplary levels of design, as well as, affordability. However, a 2011 decision by the California Attorney General, overriding the Santa Clarita land use and development plans of the Los Angeles County Regional Planning Department and Board of Supervisors, places new restrictions on development that require “smart growth techniques” in combating greenhouse gas emissions; the principal target of California’s Global Warming Initiative.

Los Angeles County planners and elected leaders must respond to this challenge with innovative plans that effectively reduce the emissions and impacts of urban development and transportation systems throughout their communities and jurisdictions; which can not be effectively accomplished without comprehensive coordination of land use and development planning with modern, environmentally sound transportation system design and implementation.

It is in areas of dynamic growth and development such as Santa Clarita that the resources, vision and capabilities of major development interests can provide incentive and economic support to the development of mass transportation systems worthy of 21st century planning and urban design. Indeed, the only persistent negative aspect of life in Santa Clarita communities is the growing congestion and commuting hours residents must endure in traveling through the freeway funnel between their homes and the Los Angeles basin, downtown LA, West Los Angeles and the San Fernando Valley. It is quite clear, that the wide range and variety of interests that the Local Construction Industry can bring into focus in support of transportation development that best serves the specific needs and opportunities of the cities of Santa Clarita and Valencia, and the extended Santa Clarita Valley, is potentially the greatest organizing and leadership opportunity presented by the American Monorail Organizational Forum.

A cooperative planning effort bringing together diverse public and private agencies, authorities, owners and community interests into a forum of common goals as proposed here, could approach and solve the most important of problems, while achieving transportation goals that none of the participating forum interests could plan or implement on their own. The monorail system design and solutions potentially emerging from this forum could address and meet the ambitions of interests ranging from the Southern California Association of Governments’ regional development and transportation goals to the improvement of the quality of life for the average resident of the Santa Clarita Valley, while responding to the environmental regulatory challenges of the California Global Warming Initiative through local government-led planning reform. With the support and participation of all interests in the County Government-Local Construction Industry-led forum and planning program, a successfully implemented, self-supporting monorail system could be developed to serve the community in the broadest sense, as an integral part of the local economy.

The American Monorail-proposed regional commuter system, originating in the Los Angeles International Airport, traversing and connecting the western City and County of Los Angeles with the vast suburbs of the San Fernando and Santa Clarita valleys, would serve as a commuter, as well as, recreation, tourism and commercial link across the greatest concentration of population in all of Southern California. Extending from the coastal areas of Playa del Rey and Marina del Rey northward through the heart of West Los Angeles into the center of the San Fernando Valley, home to one third of LA City’s residents, and continuing into the growing suburbs of Santa Clarita and Valencia, the proposed 50-mile monorail would link large concentrations of population with attractive, high density destinations while serving hundreds of thousands of passengers per day.

Each of the private business, industry and development entities participating in the Forum could derive significant opportunity and enhancement of their respective business and property interests, while the planning and implementation objectives of local government and environmental authorities could be realized well beyond their current potential.