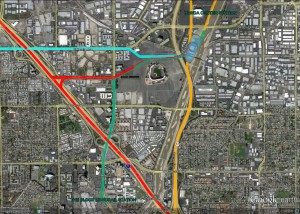 The City Drive Connector is a two-mile long local monorail system extending from the ARTIC facility north along the Santa Ana River to the Honda Center and south to the Anaheim Stadium complex before continuing south along The City Drive to The Block shopping mall.

It crosses other monorail systems but does not connect to them. All of the systems are accessible at the ARTIC facility as well as linkages to AMTRAK, and the Metro and OCTA rail and bus systems.